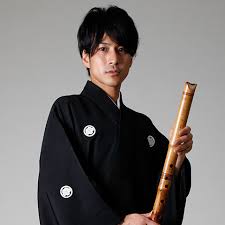 He first fell in love with the painting Faces of Suns and asked the shodo artist Saiso Shimada to lend it to him for a few days.  Staring at the painting he was stirred to create music for the composition and become intrigued by the new direction in Saiso Shimada’s shodo work.  When she explained that she was meditating and creating works of art, he decided to join a session.  The strong experience lead him to create new spontaneous works of art with Saiso Shimada and Beyond Our Best.

From a family of Buddhist monks, Nakamura was supposed to like his brother, become a monk himself and take the responsibility of the temple.  However, something within Nakamura pushed him in a different direction.  Instead of being a monk, he decided to pursue the spirit through music.

[Excerpt Taken From the Japan Foundation]

Masaki Nakamura first encountered Shakuhachi at the age of 17. Enchanted by the instrument, he pursued a major in Shakuhachi at the Department of Traditional Japanese Music of the Faculty of Music in Tokyo University of the Arts.

Nakamura won the 6th Shakuhachi Rookie of the Year Competition, the 3rd Tokyo Japanese Music Competition, and the 2nd Western and Japanese Instruments Ensemble Competition. He is also the recipient of a Yomiuri Shimbun Award, a Japan Folk Song Association Award, a Komoda Encouragement Prize and an Uwajima Grand Prize. Since graduating from university he has performed as a guest player at Suntory Hall, Ryogoku Kokugikan, the Embassy of the United States in Japan and other venues throughout Japan. He has also performed overseas including Turkey, Algeria, China, and the United States.

Nakamura’s original composition brings forth the true resonance of Shakuhachi and projects the natural world and the spirit.  He is highly regarded and demanded and a hard man to catch — even for a meditation.