We include here examples of artistic propositions to be interpreted freely by artists who can incite the collective imagination. We encourage artists to make new suggestions.  We suggest that any ideas used be appropriately cited to the authors to empower and continue to inspire.  We encourage all artists to tell us about any interpretations so we can share their work with others.

A field of sunflowers, moving sculptures.  The flowers converse, look after one another, bow in all directions.  Eyelids of suns.  Us.

A purple cloud condenses into a rain of ideas.

For more Artistic Propositions you can find them in Dr. Paul Briot’s book Le Rayonnant (the latest 2018 edition has even a mobile ready QR code so you can listen to the music as you see the painting and read the text.)

Take a peek at the videos of the artists intepretations of his work on this site in the section Musical Paintings or Meditative Soundtracks as they include a few propositions from the book already translated from French, to English and Japanese.  If you are an editor and wish to have translation English or Japanese rights of this 2018 cutting edge mobile musical book contact us.

Saiso Shimada, a talented shodo artist who has meditated for many years with Zen and Qigong and now meditating usind Advanced Yoga Practices (AYP),  created thirteen pieces of shodo art which elevate us with a moment of silence.  These thirteen shodo paintings by Saiso Shimada can be seen in Japan until August 2019 in galleries, museums, zen temples and other public events or spaces upon request to the artist (Saiso Shimada) or directly to us. 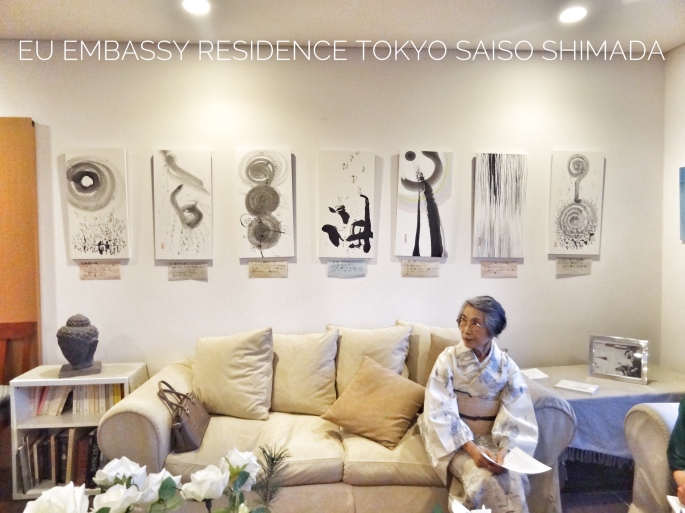 Shimada’s inspirations for the paintings were passages of the philosopher, Dr. Paul Briot’s book Le Rayonnant…un art vers l’Linfini… published by the Parisian editor Caracteres.  Moved by thirteen passages in this book that had been translated into Japanese, Shimada meditated on the lines, and attempted to create an art that can invoke silence or beauty without words.Her success was immediate at three private viewings at the EU Embassy in Tokyo in June 2016 and also at a gallery exhibit in Ginza, Tokyo.Amongst those who came to view the paintings and speak privately with the artist was a well known Noh Actor, Sumie Artists, a Yogi, a Qigong Master, and even a Zen Monk.One onlooker who claimed to experience feelings of calmness, peace and even health organized a second exhibit for Saiso Shimada.Today, six of Shimada’s paintings appear in the latest edition of that philosopher’s book, Dr. Paul Briot’s, latest 2017 reprint, Le Rayonnant…un art vers l’Linfini.  Published by Caracteres, France.  Illustrations by Saiso Shimada.

Dr. Paul Briot in this book shares ideas for artists to experience and create a new art that elevates with a moment of silence and beauty.  Shimada, the first artist who was able to use meditation techniques to create precisely the art that Dr. Paul Briot envisioned, is certainly not the last.  We ask that other artists who meditate obtain a copy of the book and share with us their experiences and art.

Art rather than words are used by Shimada to interact with a crowd inciting our imagination and anchoring a powerful experience that ignites us to create with our spirit.

The silence created by Saiso Shimada’s art is a glimpse of what can be found in individual meditation, without any formal training needed by the general public.  Since many do not know meditative techniques, nor have the discipline nor the know-how to meditate, art that creates a split second of silence within the viewer — a quiet space that provides a peek into meditation without the many years of practice is a welcome moment in our busy lives. Naturally, to experience states of silence on a more continous level requires that an individual experience meditative states on his or her own, but art that elevates could be an introduction for those unfamiliar with meditation.

We ask museums, curators, galleries, zen temples, embassies and other public spaces to help make these shodo works by Saiso Shimada and new art works by other artists evoking a moment of silence or beauty available to a larger Japanese public.

For embassies, museums & galleries in Asia, the US & Europe, we invite financial sponsors and foundations to help make works of art that inspire a moment of silence available to a larger public.  Email us. 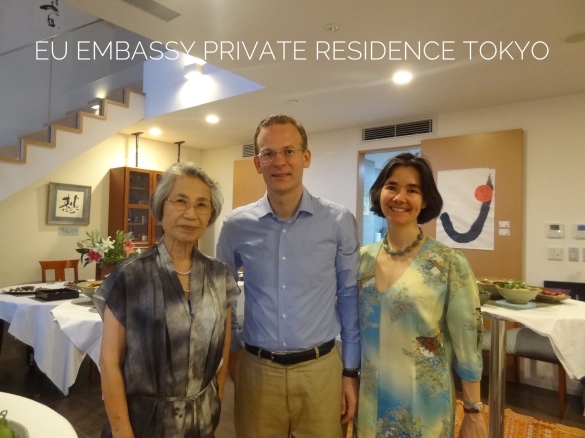 He first fell in love with the painting Faces of Suns and asked the shodo artist Saiso Shimada to lend it to him for a few days.  Staring at the painting he was stirred to create music for the composition and become intrigued by the new direction in Saiso Shimada’s shodo work.  When she explained that she was meditating and creating works of art, he decided to join a session.  The strong experience lead him to create new spontaneous works of art with Saiso Shimada and Beyond Our Best.

From a family of Buddhist monks, Nakamura was supposed to like his brother, become a monk himself and take the responsibility of the temple.  However, something within Nakamura pushed him in a different direction.  Instead of being a monk, he decided to pursue the spirit through music.

At several joint events with Saiso Shimada, Masaki Nakamura likes Saiso Shimada to select one of her shodo paintings and a text of Dr. Paul Briot that accompanies it.  He then will study both and meditates in front of the live audience on the painting and text creating a new original soundtrack.  Live.  In realtime.  This gives the audience an understanding of the role of meditation and inspiration.

These live recordings have now been featured in the third 2018 edition of Dr. Paul Briot’s book in the form of a QR code behind each painting and text.  This allows people with a mobile to not only read the text and enjoy the painting, but tune in immediately to an origanal music soundtrack created for that specific text and specific painting. It also allows people in a gallery, private showing or temple where the works are exhibited to enjoy the beauty of the painting and use their iphone to listen to the original music that accompanies it.  When this is combined in a Zen temple or spiritual site, the paintings and music can elevate and bring us a moment of silence and great inner beauty.